Home>>Blog, safari news>>How Do You Know Gorillas Ready For Mating During Your Uganda Rwanda Congo Gorilla Safari Tour
Previous Next 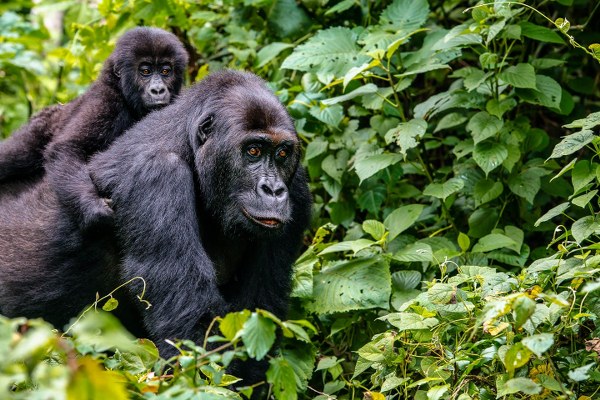 Gorillas are social and amazing apes many tourists would love to encounter on especially Uganda, Rwanda or Congo gorilla safaris. Living in their natural habitat in Bwindi Impenetrable National Park Uganda and Mgahinga Gorilla National Park, the best gift you can give yourself on your Africa Safari is by undertaking a gorilla trekking safari Uganda or Uganda gorilla trekking safari to You can also go for a Rwanda gorilla safari to Volcanoes National park or take a Congo gorilla trekking safari to Virunga National Park. Mountain gorillas are social animals and live in groups of up to 30. A group includes one older, dominant male, known as a silver-back (because of the silver fur hat develops on their backs when they grow older), several females and their young, and two to three younger, non-dominant males.

One of the popularly asked questions is how do gorillas reproduce? here is it about the gorilla reproduction cycle;

Female gorillas are sexually mature at around 7 to 8 years of age and can even have their first estrus cycle by then. However, they do not usually reproduce until they are 10-12 years old. Surprisingly, after their first ovulatory cycle, they have to wait for a two-year period to breed or procreate an infant. Females are in estrus (recurring period of sexual receptivity and fertility in many female mammals) for 1 to 2 days per month and only the dominant silverback has breeding rights.

The reproductive cycle is 28 or 30-33 days per month depending on the subspecies.

Female gorillas give birth to 1 offspring per delivery, and rarely produce twins.

After birth, ovulation doesn’t occur again until about 3-5 years. Male gorillas mature at a later age than the females and are rarely strong and dominant enough to reproduce before 15 to 20 years of age. The male mountain gorillas prefer to mate with fertile females. Gorillas share several mating behaviours just like human beings. Similar to humans’ gorillas may breed all year round and childbirth can occur any time of the year. However, they are polygamous in nature because of the dominant silverback mates with several females in his group/family. Though polygamous, in gorilla groups that have several males, females may be forced to copulate with more than one.

How do you know that the male & female gorilla is ready for mating?

Male gorillas can perceive the moment when a female is on heat or ready for mating, though the external signs are not evident like in some mammals that show swelling in their genital regions. The females attract male gorillas with body movements: at the initial stages, the female gorilla slowly and leisurely approaches the silverback gorilla with uninterrupted eye contact while puckering her lips. She then assesses the male response to take the next step. If the male being courted does not react at her insinuation, she gets closer and can even touch him. If this still does not work, she hardly hits the ground in a final attempt to draw his attention. On the other hand, in case the male gorilla performs the courtship to mate, he gets closer to touch her and emit sounds. After courtship, they copulate on the ground just like many other mammals.

Of recent, however, lowland gorillas of Kahuzi Biega National Park were for the first time caught on camera performing face to face intercourse. This was believed to only be among humans and bonobos.

“It is fascinating to see similarities between gorilla and human sexual behaviour demonstrated by our observation,” said Thomas Breuer of the Max Planck Institute for Evolutionary Anthropology after the findings.

The gorilla gestation period is about 8.5 months and born with about 2kgs at birth. Usually, births occur at night, any time of the year and every about four years. 38-40 per cent of the infants die at some point during their first three years of life, during the lactation period. The mother gorilla carries her young, which firmly holds the mother’s hair till they are 3-6 months old when the infant begins to walk. At three years the infant is weaned. Females do usually have one baby once in about 6-8 years and may have just about 3-6 babies in their life span. Males do not usually participate in offspring care, although sometimes they socialize with them. With the small number of gorillas, this low reproduction rate complicates recovery of gorillas when lost and therefore need for constant conservation.

About the Author: Promotions Department

YOU NEED SOMETHING, SEARCH IT HERE!

OTHER USEFUL LINKS IN THE SITE